Pupils, Cameron Shewan and Jack Gillies represented the school in the Crown Office and Procurator Fiscal Service public speaking competition.  There were four teams of two from Aberdeen Grammar School, Bucksburn Academy, Bridge of Don Academy and Dyce Academy.  The first round was here at Bridge of Don on 27 February and the boys along with the team from Aberdeen Grammar School went through to the final held at the Town House on Monday 24 March.  They can be seen in the photo collage below, along with the others teams,  with Amber Thomson who was reserve speaker and did the vote of thanks at the end of the night. 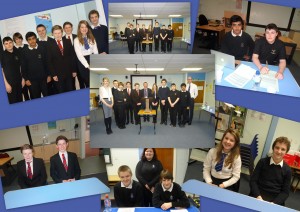 rised as a very close final.  The boys are pictured with the Aberdeen Grammar School team and the judge at the Town House below. 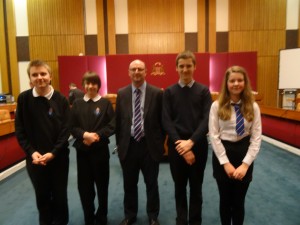 Our team of senior pupils who designed and built their own Remotely Operated Vehicle (ROV) came 5th out of eleven teams from all over Scotland.        The team – see photo – were particularly pleased as their ROV was one of the most economical models.  The competition is organised by Robert Gordon University and the Marine Advanced Technical Education Centre based in the USA.  Well done to Kimberley, Peter, Daniel and Ross. 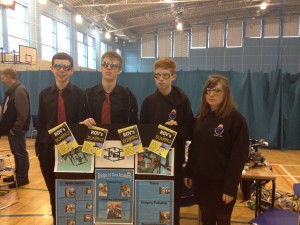 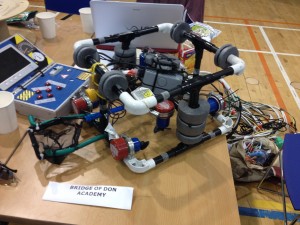 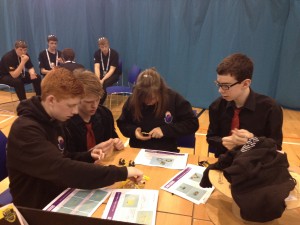 As 2014 marks the 100th anniversary of the start of the First World War, Aberdeen City Council  presented a conference and pupil discussion featuring visiting guest speakers and pupils from Aberdeen’s twin cities in France, Germany and Belarus.   Four pupils from S3 attended.    On Thursday 27th March, Amber Thomson and Lewis Booth heard from WWI experts on topics such as The Gordon Highlanders, the role of women in the war in both Britain and Germany, what happened to conscientious objectors and how the war shaped Europe as it is today.   On Friday 28th March, Sophie Robertson and Yamina Merrakech joined Lewis and Amber for a pupil discussion   Pupils from Germany, France, Belarus and Aberdeen had the opportunity to voice their opinion about issues such as –

-Social media and propaganda-how has communication changed from WW1 to the present day?

-To what extent did women’s lives improve as a result of the war?

-In what ways did WW1 give people more of a say in their governments?

-How has Europe changed since WWI?

-Compare the reasons for war in modern day.

Use thefollowing link to see photos of the conference.