Due to adverse weather, the Global Goals group Curry Night has been postponed until the 22nd of March.

On Wednesday 15th of November, Bridge of Don Academy was awarded the Fairtrade EcoCity Award for promoting sustainability during Fairtrade fortnight. The group have been involved in visiting primary schools to teach pupils about the importance of Fairtrade and the Rights of the Child. They also held Fairtrade snack stalls for both staff and pupils. They then used the money they had raised during this to donate to Cornerstone.

As a finale to their Fairtrade fortnight events, the group organised a Fairtrade football event which included a staff v pupils match. They also held a debate attended by the MDEC, Bala Sport, KoolSkools and local representatives from Aberdeen Fairtrade.

As part of winning the award, the group won £100 worth of vouchers. They plan to use these to further promote Fairtrade within the school and local community. This week they will have a Fairtrade stall at the Christmas fayre.

A big congratulations to all those involved! 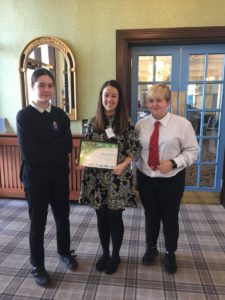 Our assessment for silver award of the United Nations Rights Respecting Schools Award took place on 3 October 2017.  The assessors visited the school for a morning and spoke to pupils, staff and parents.  They looked at the evidence we had gathered, visited classes and had a tour of the school.

They recognised all the hard work of staff and pupils and as a result we were successful in achieving level 1 – the Silver Award.   A certificate is on its way to us.  Well done to all the staff and pupils involved in the work leading up to the award.