The S1 U13 football team celebrated their success after winning the Green Final Trophy 5-1 against Bucksburn Academy. This is a great achievement by all the pupils who were a credit to the school, showing determination and confidence as a team as well as playing in a fair and competitive manner. This is the first time in ten years a football team has won a trophy and the last time Bridge of Don won this trophy was back in 1980. With the season now finished we look forward to the team playing again as U14’s in the S2 competitions in August. Well done to all players! 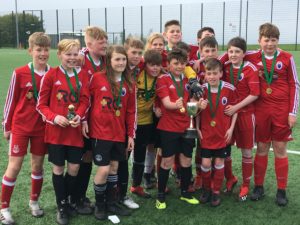