Bridge of Don Academy is a six-year comprehensive school and Community Education Centre.  The school roll is currently 650.

The school campus is shared with a neighbouring primary, Braehead School, which is a brand new school. Also on the campus is St Columba’s Church of Scotland and Roman Catholic Church.  The school is on an elevated site with extensive views over Aberdeen and the North Sea. The school’s playing fields and Westfield Park are adjacent to the campus.  School facilities include a 25 metre swimming pool and a drama studio.

The school is well regarded by its community and local families are very proud of it.  The school community includes Bridge of Don and the villages to the north such as Balmedie.  Pupils from these villages have been taken to this school by bus since 1972.  Some of our current country pupils have grandparents who were educated here.

In December 2009, HMIe visited the school again to evaluate the quality of our current curriculum and our plans for Curriculum for Excellence, the new curriculum for S1 pupils who joined the school in August 2010 and those following them.  Our current curriculum was described as “sound and well organised”, providing pupils with “a broad range of NQ courses and wider skills for work”.  In terms of the new curriculum, the school was praised for its plans which “are rigorous and have been given a great deal of thought”.  The HMIe report noted that “the coordination of the planned changes is impressive”.  In terms of the current curriculum, the report notes “there is a great deal of achievement in the school, with young people performing to the highest level in many areas.  Personal and social achievements are developed well and there are many examples of young people developing a broad range of skills”.

The school’s energetic and talented staff have excellent relationships with pupils, parents and the local community.  We have an active and supportive Parent Council and would welcome new members.  There are strong links with local companies, with a number of them making a significant impact on the curriculum.  The school is at present working to expand these links as part of a drive to make pupils’ education even more relevant to the contemporary workplace.

For more information, download a copy of our latest School Prospectus or call to arrange a visit during the school day. 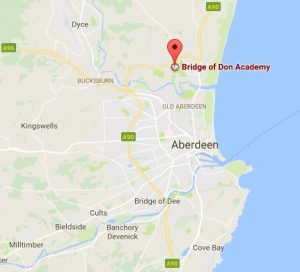